The squadron was again reformed, as 77 Squadron SM,  1 September 1958 as one of twenty Strategic Missile squadrons associated with Project Emily.

The squadron was equipped with three Thor  intermediate–range ballistic missile (IRBM) with thermonuclear warheads and based at  RAF Feltwell in Norfolk.

In October 1962, during the Cuban Missile Crisis, the squadron was kept at full readiness, with the missiles aimed at strategic targets in the USSR.

With the termination of the Thor Program in Britain, the squadron was disbanded on 10 July 1963. 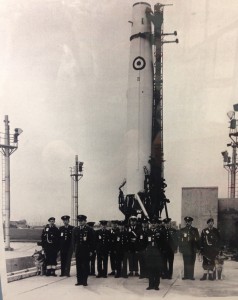 One of 77’s Thor missiles being raised into position at RAF Feltwell, 1960